Navigraph has published the results of its FlightSim Community Survey 2017 conducted between 20th October and 6th of November.  This year 3,187 respondents participated, which is an improvement over last year’s 2,200.

Notable observations in the survey depends on the reader, but in general the average flight simmer is a 47-year-old male living in the US, working full time, with an average of 16 years of flight simulation experience, flying a Lockheed Martin Prepar3D v.4, mainly out of interest, about five times a week, for a weekly average of 11.5 hours.

Lockheed Martin Prepar3D is now more popular than Microsoft FSX and that Laminar Research X-Plane has doubled in popularity since last year.

This year’s survey was organised according to the following topics:

The average flight simmer is 3 years older on average since last year’s survey.  This year your typical simmer is 47 years old, but last year he was 44. However, as seen from the histogram below, we have a younger generation coming, and a rather noticeable long tail. It seems, however, like flight simulation is not very popular during university studies.

The 2017 survey respondents live in:

(Percentage of users from the Navigraph user database presented in parentheses.)

28.82% of the respondents answered that they do something relating to aviation such as pilot, instructor, air traffic controller, engineer, software developer, airport operations, dispatcher or cabin crew.

6.7% are currently enrolled in flight school.

Respondents seem to link the start of their simulator career with the launch date of a particular software. Compare this list with the histogram below (the software titles which do not correlate have been stricken trough):

Having seen this histogram an average might not make sense, but if someone is interested it happens to be 16 years. 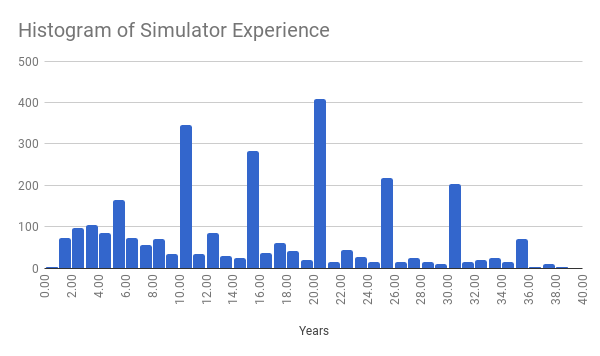 How much do people fly?

When asked how much time you spend in the simulator each week, the average is 11.5 hours. This is two hours longer than reported by the 2016 survey. 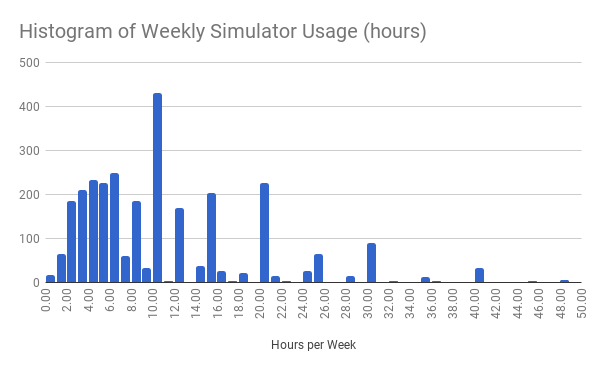 Where to people fly?

London Heathrow (EGLL) was voted the most popular departure airport, as well as arrival airport, followed by Amsterdam Schipol (EHAM). Third was London Gatwick (EGKK) as departure and Frankfurt (EDDF) as arrival.

Why do people fly?

What do people fly?

Last year, Navigraph did not pose the question as detailed. At that time, the responses were the following:

X-Plane has grown in popularity during the last year.  Also Lockheed Prepar3D has increased slightly. This becomes very clear looking back at the AVSIM 2013 survey when Microsoft FSX had a strong majority. (Note that Dovetail Microsoft FSX: Steam Edition was released December 18, 2014.) 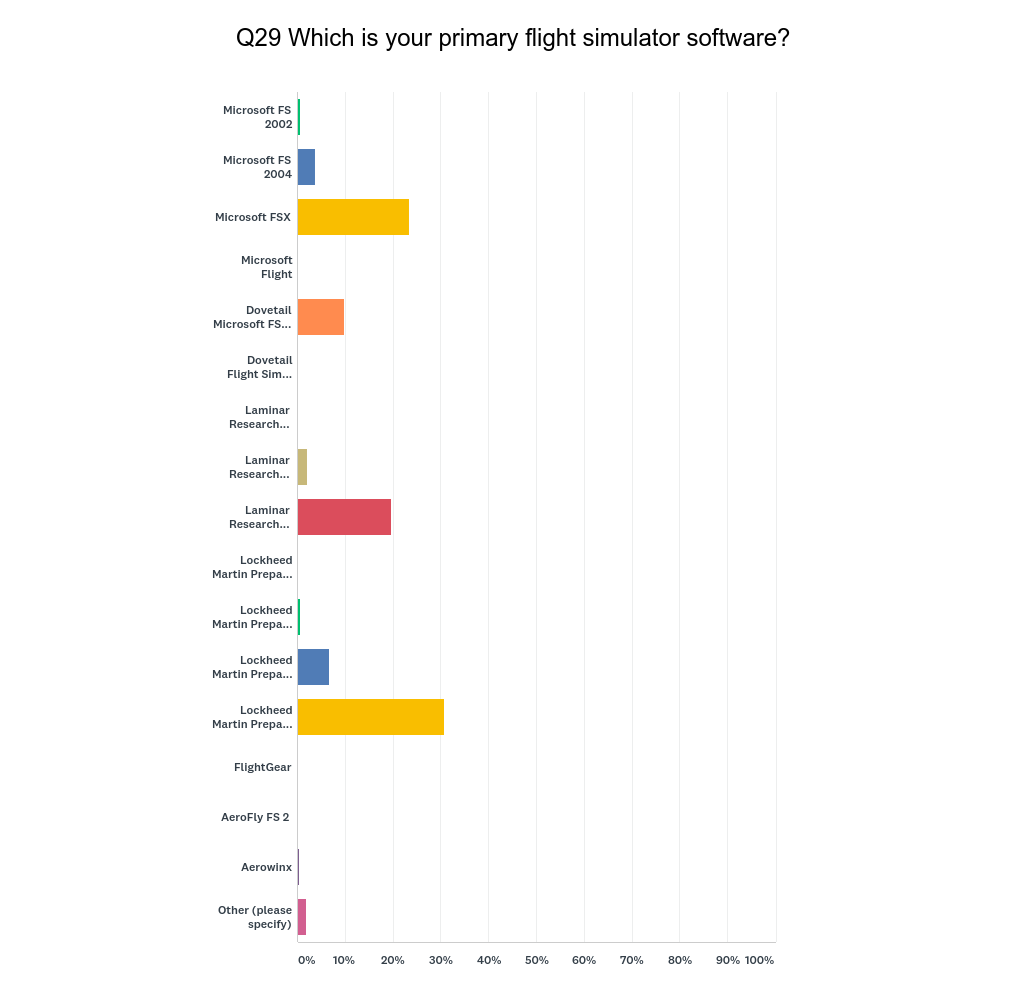 More than half of the respondents know what VR is, but only 6.77% actually own a VR headset and 3.08% use if for flight simulation.

When comparing spending between current 2017 survey and the 2013 AVSIM survey it is hard to tell any trend – mainly because the binning of these histograms are different due to currency. However, there is a notable number of respondents who selected > EUR 200, i.e. > USD 250 per year.

The conferences people indicate they will attend in the future are:

79.01% have not contributed to the flight simulation community. 5.90% have developed some software. 4.30% have modelled or painted livery or scenery.  7.64% admin some flight simulator organization.  Many state that they are beta testers or contribute in forums, or help with filing and editing flight plans.

Posted in Features Tagged with: Navigraph

Sign up to our newsletter for email updates and news.